Angel Lexi here, taking my blog back for just a little while. I’ve seen my Mom tilt her head in that way that I know she is thinking hard and she’s looking at little Xena when she does it. Let’s start from the beginning so this will make sense.

I knew it would be terrible for Mom when I had to leave, so I hung on for two more months than the docs said I would. Then I had no choice but to go on back to my Creator. After four months I could see how sad Mom still was, so I asked the Big Guy to send someone to help her. I figured He would send her another schnauzer, maybe even let me pick out the right one. At first I didn’t understand why He sent her Lucy. When I asked, He said to wait and watch. I could tell she was still very sad, but the break in her heart seemed to be starting to heal, at least a little.  As the months continued to pass, I saw stitch after stitch forming, creating a heart that could once again hold love. Lucy was accomplishing the job He sent her to do.

After the first anniversary of my leaving had passed, The Big Guy called me to Him to let me know that my Mom was ready for another schnauzer, and that I could help Him find just the right one. I knew exactly what Mom needed. She needed another little girl who looked a bit like me, but not too much. She had to be spunky and smart like me, and ready to be Mom’s partner in lots of activities, including being the church dog. I always loved Mom to the moon and back, but I wasn’t a “touch” dog except for when I was therapizing. Even though that is something she wanted when she adopted me, she never held it against me that it wasn’t in my personality. This time, I wanted Mom to get a cuddly girl, too. I knew the puppy couldn’t be too far away, like in China, or Mom wouldn’t get her, so I started searching in my home state of Georgia. Of course, The Big Guy knew I would find just the right one ’cause He had already picked her out. Boy, I can’t get up early enough to outsmart Him!

When the time was right Mom contacted my breeder, Becky, who understood what Mom wanted. The litter that would be ready to go in October were from a mom and dad who had puppies with temperaments more like mine, but they were all black and all males. Nope. The litter Becky expected to get in the spring would be from a mom and dad who usually had puppies that looked like me but were all cuddly love bugs with no “attitude.” Nope. So Becky told Mom about another great breeder named Toni. Toni was three hours away, and I knew that wouldn’t be a problem since Mom had driven that far to get me.  When Mom went to see these 15 week old puppies, Toni had already picked out the one she thought would be the best match for Mom. You see, I had whispered in Toni’s ear which one to choose, and of course, it was the girl who would soon be named Xena. Even though Xena’s only been in the family for a little over two months, Mom’s heart is healing much faster so it can hold all the love welling up inside it.  And Lucy’s new job is to help raise Xena and to be a wonderful big sister to her. She sure is acing that one, too.

Next thing I know, The Big Guy informs me that I am in charge of watching over Xena. Well, I’ll tell you, that really cut down time with my friend Spike. Puppies take a lot of watching. I made sure she didn’t chew everything up like I used to do as a puppy. Yep, checked that one off my list. Other than the potty training, everything has been going along beautifully, and she is almost there with that, too. Just as I was trying to pat myself on my back, Mom sends up a prayer to The Big Guy, asking for me to give Xena some of my bravery. It seems that every morning when Mom and Xena go to work, Xena is shaking in the car for at least half of the way there. She has other fears, too. I know, I know, she is supposed to be the Schnauzer Warrior Princess, but that’s for later. Even little princes and princesses have to grow into their titles, right? I started walking around thinking about this dilemma.

While it’s true that I have always had enough bravery to share, I didn’t know just how to go about this. I was walking and thinking and not paying much attention to where I was going. When I looked up I saw that I was in a different part of over the rainbow. I had wandered into the Land of Oz, and you will never believe who I found there…My Dorothy!

After getting caught up on the latest Oz news, I asked My Dorothy if she had any ideas. She asked me if I remembered the Cowardly Lion. Of course I did! He was one of my favorites. My Dorothy reminded me that he hadn’t always been brave; it was after he met her and the Tin Man and the Scarecrow that he learned to love and found his courage. Even then, he didn’t realize he had courage until the Wizard gave him a medal with the word Courage on it. 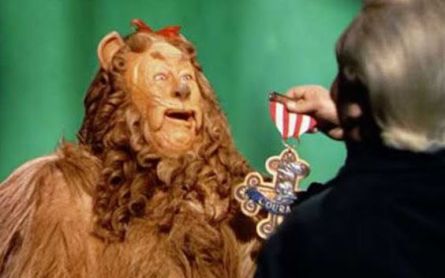 Suddenly, I knew what to do. For now, I am going to let little Xena grow and experience life and build her courage. I will keep en”courage”ing her and do my best to instill some of my extra bravery into her. Do you remember when the little warrior princess went after the big dogs in the house because they tore up her favorite toy? Who do you think helped her?  The more she learns to love and trust, the braver she will be. Some day she will get her own medal and be the superstar she was born to be.

So back to the beginning. When Mom tilts her head in thought, it is because she sees me in Xena, and wonders. Now you know why.

I think I will take a break from puppy watching and go running with Spike for a while.

I am Angel Lexi, the Brave Guardian.

42 thoughts on “Healing a Broken Heart”